I must admit that going to bed last night and knowing that the Olympics were over for another two years made me pretty sad. I have always been a big TV fan of the Olympics, but this one was the first I saw in person. It was also the first one that felt international and exciting, but also closed to home. I’m not sure how to describe that feeling well. I’m not sure I would be as excited about the Olympics in Rio. Maybe it has something to do with the fact that London is familiar enough that I wasn’t completely overwhelmed with all the other things I wanted to do and see and so we could really just enjoy (and focus on) our day at the Olympics. So, in memory of that great experience here are few photos and thoughts. 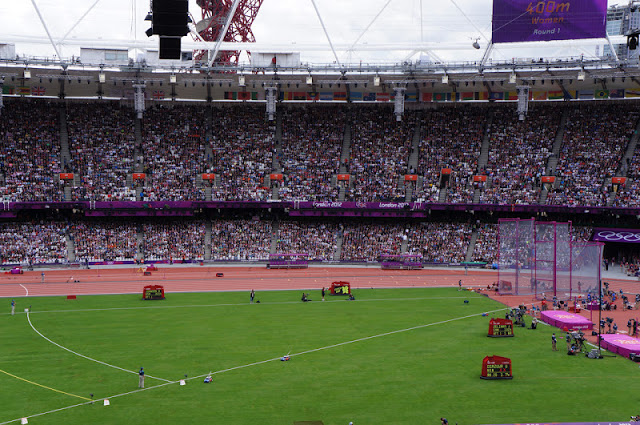 1. It is convenient to be Swiss, and I’m not. For the first time I wished I had a Swiss (or EU) passport when we arrived at London city airport and Martin breezed through security while I had to fill out an entry with my address, duration of stay, etc. etc. I’m used to filling those out when returning to the US, but somehow this time it made me feel a bit more unwelcome in the UK. It also was annoying that Martin and I had to go through different lines.

2. My Swiss Card is invisible to airport security.  I have now traveled to/from the US (3 times), Spain, and London without taking my little Swiss Army card with miniature scissors and tweezers and a small blade so many times that I don’t even bother to take it out anymore. I’m just testing how long it takes for them to find it (or continue to ignore it). It seems that within Europe scissors/blades under 6cm may be acceptable for carry-ons so perhaps that explains it, but I’m not sure about all those US trips.

4. Location, location. Our hotel didn’t have much of a view, but who can complain about free cookies, wifi, and a 5 minute walk to Big Ben, Westminster Abbey, the Tate, and Starbucks.

Friday morning we woke early to get breakfast before heading to Olympic Park. We could have arrived earlier, but even with the short walk from the Stratford stop through security we were well settled in our seats before the morning’s athletics launched. We were surrounded by British fans and mesmerized by all the cute little kid accents floating through the air. All seemed to be best friends with Jessica Ennis 😉

5. The Olympic flame seemed a little small. Maybe I am just comparing it too much to the Beijing flame and then considering the controversy about it being in/out of the stadium made it seem a little underwhelming. It was definitely just not as impressive over in the corner of the stadium. We did manage to squeeze in after the competition to feel its warmth and see it up close. It was stunning from that angle. 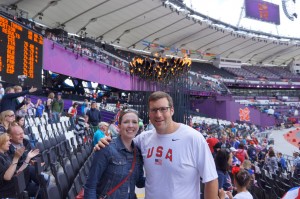 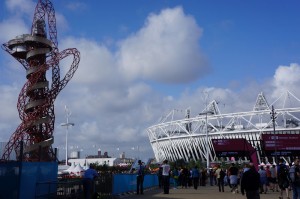 6. Even qualifying rounds can be riveting. The heptahlon’s 100 meters and men’s hammer were exciting too watch. The crowd roared for Jessica Ennis (and every other Brit) and I have never seen Martin so nervous watching Kibwé throw. He looks relaxed below (after Kibwé qualified), but it sure did make it fun for me to watch him and the field. 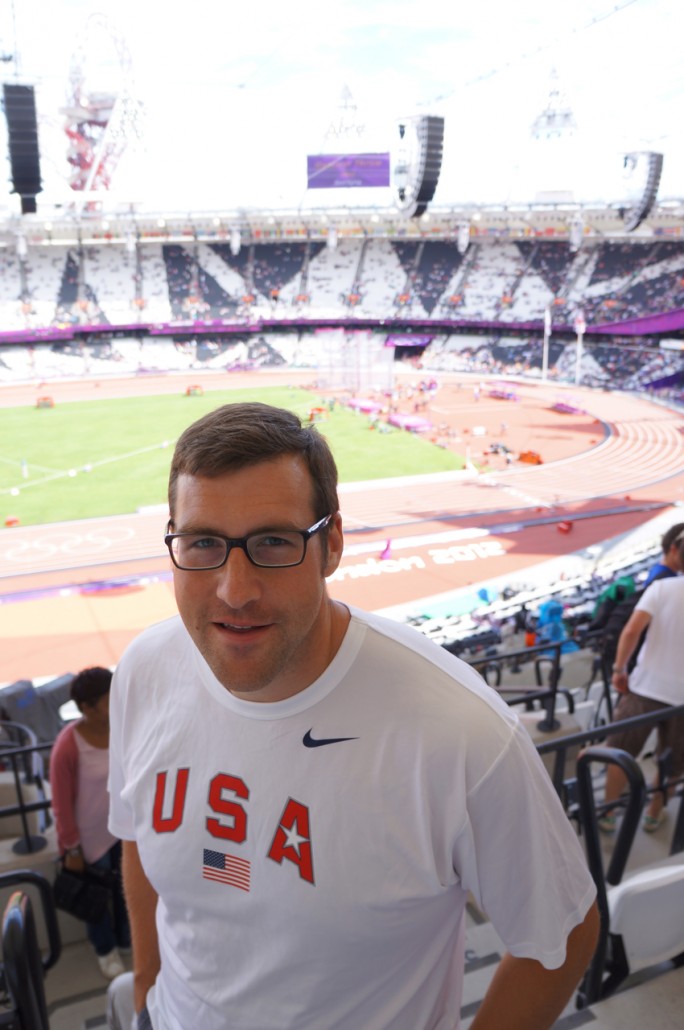 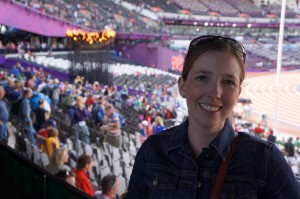 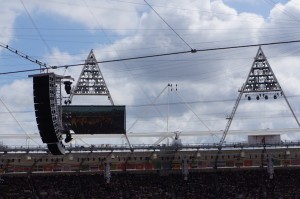 7. The MINI Minis were awesome. Most larger track & fields events use remote control vehicles to retrieve the hammers and other throwing implements. The Olympics topped the standard monster truck retriever with the awesome MINI Mini. There were three out on the vehicle zooming around to retrieve the hammers. (Sanya Richards Ross leading her qualifying heat and the MINI minis below.) More close-up photos of the Mini MINIs profiled here. 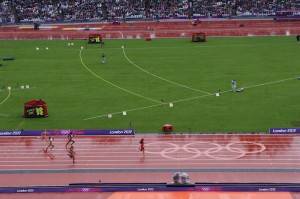 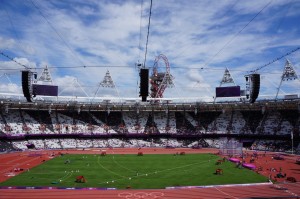 8. The empty stadium is as British as the full stadium. I loved the fact that the seats were different colors made the stadium also look patterned like the Union Jack even when the spectators had already departed. I also really like the fuchsia/purple hammer page. 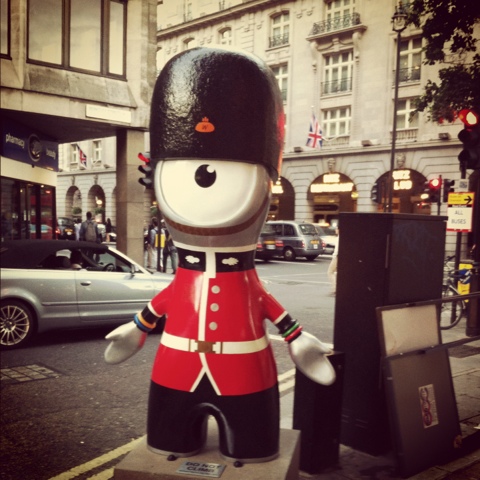 9. Wenlock grows on you.  I wasn’t a big fan of the one-eyed Wenlock as the Olympics mascot, but he really grew on me. Perhaps it was seeing him around the city decked out in different outfits. Perhaps it was seeing him jumping around during the track & field evening events trying to pass out gold stuffed Wenlocks to Usain Bolt or cheer on Mo Farah. In the end, his personality shined through and I thought he was pretty cute.

10. Ottolenghi was delicious. We finished a day at the Olympic Park with a late dinner at Ottolenghi in Islington. I had made an online reservation only a week before and I surprised that there were still openings. As all the plates are small plates for sharing we ordered a selection from the hot and cold menu and were perfectly stuffed by the end of the evening. Unfortunately we were so busy enjoying the food (and listening to the conversation our our nearby dinner companions at the shared table) that I was too distracted and self conscious to photograph the food. This is what we had though:

11. I am ready to return to London anytime. Our brief trip reminded me how much I love London (as I stated in a previous post). Even over just two short nights there was so much I still wanted to see and do and soak in. We spent a morning shopping (I was a little overwhelmed), stopped at Harrods so Martin could check it out, and even made a quick stop at the Victoria & Albert Museum and shop. I hope to be back in London before the beginning of January 2013 so that I can go to the British fashion exhibit.)

We had a wonderful weekend and returned home in a torrential downpour late Saturday night sad that we weren’t still in the stands or out exploring London. I am now looking for lots of reason to go back. Maybe I’ll have to find a half marathon to schedule my next trip around. 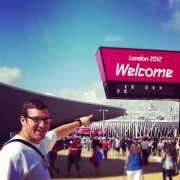 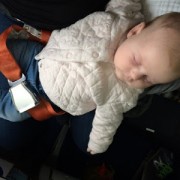 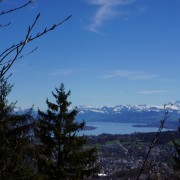 a slow start to spring
0 replies