My love of the season is no secret. Perhaps it is my mountain upbringing and many fond memories of the back hill sled run, ski weekends with my family, and homemade snow ice cream. This fondness means that I am a sucker for winter weekend getaways filled with activities in cold mountain air, warming up with hot drinks, and the wonderful exhaustion that comes after a day spent in the snow.  It is hard to imagine what could make a weekend even better, except perhaps the beauty of the landscape and architecture of the Engadin valley, excellent company, and some very delicious meals.

After the scenic three hour train ride from Zürich, along a route which was named a UNESCO World Heritage site in 2008, we arrived in scenic Samedan. Martin found a hotel for the weekend which included unlimited access to the Samedan mineralbath & spa, free train transportation around the Engadin valley for the entire stay, and ski tickets for only CHF 25 per person per day. All in all this made the quaint village even more appealing than its nearness to our favorite sledding destination.

We spent the afternoon walking the town, exploring the shops, and then headed for a tour of the mineralbath before dinner. One of my favorite sights is all the Italian-influenced architecture of most buildings in Samedan and Celerina & St. Moritz nearby. Wood is used more sparingly than the chalets in Davos or Zermatt and the the colors are more cheerful. Needless to say I identified several dream homes throughout the weekend, including the little yellow house pictured below.

It also fun to see all the decorative plasterwork called “sgrafitto” (and sometimes painting) adorning the walls and window frames. Not only does the etched plaster often date the buildings, but it provides a sort of fanciful trompe l’loeil effect. True sgraffiti is scratched into the upper surface of the plaster into uneven lines that reflect the light differently. Some sgraffiti in the are can be dated back 400 years. 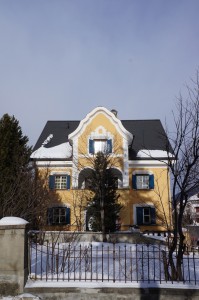 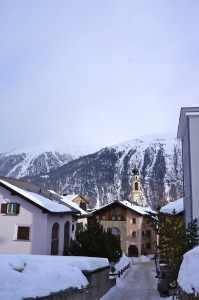 On Saturday morning, after a late breakfast and a pep talk from Martin, I worked up the courage to put my skis back on and test the slopes. It has been about five years since I last skied in Bend, Oregon, with my family and I was pretty of afraid of having forgotten how to ski well. Luckily it took only one run on the bunny slope to convince me that I hadn’t forgotten. It was an ideal ski day–clear skies, quiet runs, and a little fluffy fresh snow on top. I only enjoyed about 7 runs and one ride up the gondola before we headed off to St. Moritz for Martin’s appointment with the bobsled, but I am already hoping to squeeze in at least one more ski day before the end of the season. Perhaps my next ski trip will also be back in the Engadin, or at least within the canton of Graubünden (Switzerland’s largest canton by area) as there are 360 ski lifts, 106 chair lifts, 22 gondola lifts, 27 aerial tramways, and 6 funicular tramways within the canton (as well as 150 valleys, 937 mountain peaks and 615 lakes). 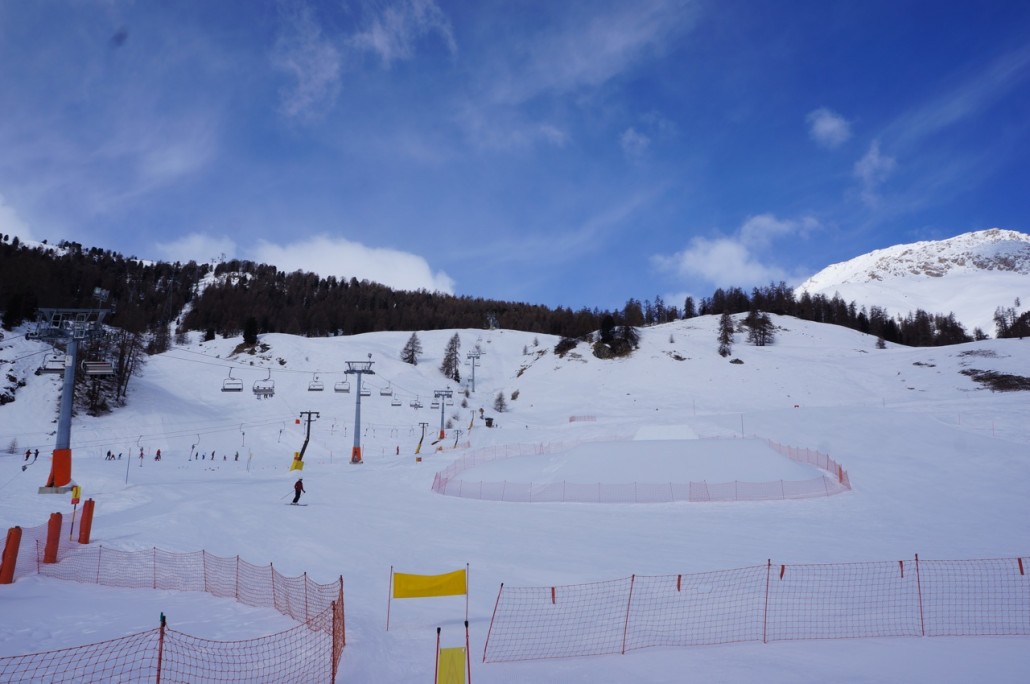 Martin’s afternoon on the Olympia Bob Run, the only all natural ice bobsled track in the world, in St. Moritz is well described on his blog so I recommend that you read his account there. I enjoyed hearing his monobod runs announced and also watching him speed down the track past me. The only thing that would have been better is if my hands were a bit warmer so I would have taken the time to perfect my video skills to capture the runs, or perhaps if I also got to go on a run. (For those interested, tourist rides in a four-man sled are offered for CHF 250 per person and, given the line we saw that afternoon, are quite popular despite the price. Martin’s monobob run was a special experience courtesy of Swiss Sliding.) 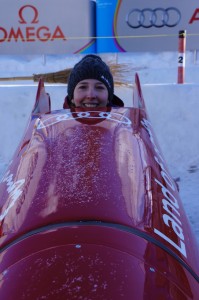 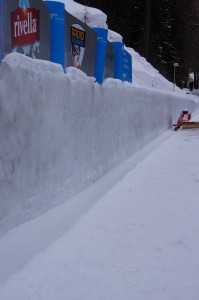 Sunday morning we awoke to another beautiful day. After breakfast we headed out to Muottas Muragl for another attempt at the famous sled run (course map below). Last year, the weather was overcast and the blizzard at the top froze our faces on the way down. This year, the weather was so clear that the run became a lot scarier and, for me, too fast to run comfortably and safely more than once as my legs and hips were exhausted after one run of dragging them as brakes. After my first run I took the train back up to the top and let my legs recover while Martin took several more runs. Next time I’m hoping the weather isn’t quite as clear or there is just a bit of fresh snow to slow the run down and make it more enjoyable for both of us. 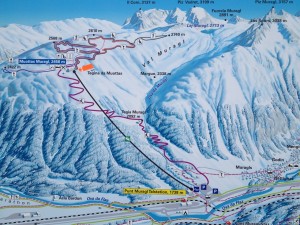 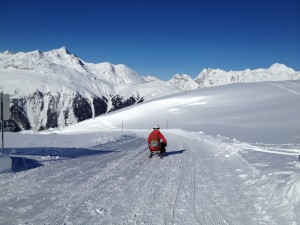 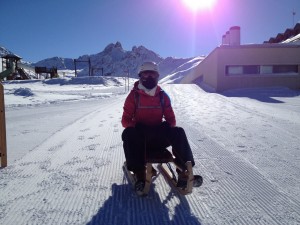 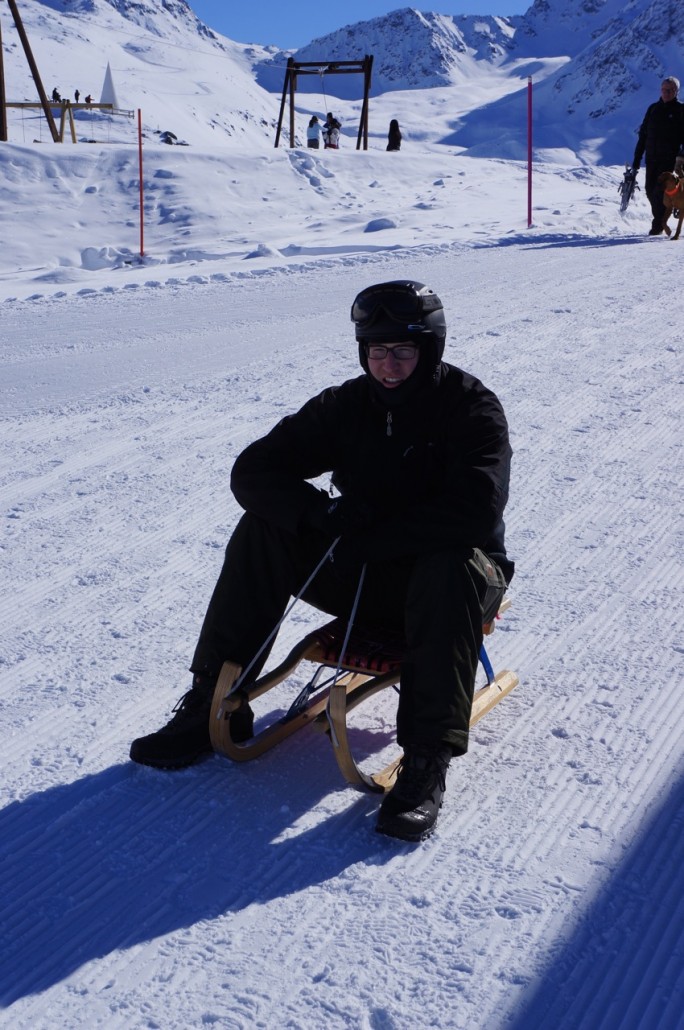 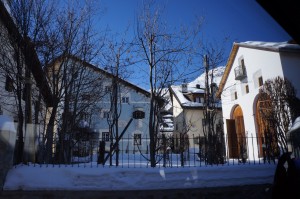 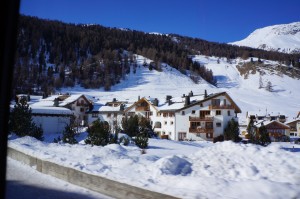 After sledding into the early afternoon, we headed into St. Moritz for a bit of exploring and a trip up to the top of Piz Nair (about 10,000 feet in elevation) via cog wheel train and Gondola before the sun set. On our way into town we prepared ourselves to see more ladies decked out in fur jackets and boots (still exceptionally popular, especially with the Italian tourists). We passed by more scenic alpine architecture in Celerina (above) and took in a distant view of the White Turf horse races and skijoring set to take place that afternoon on the ice track on top of the lake. One year I will be bundled up enough to take in the races from a closer vantage point. Just watching for five minutes from town was chilly. 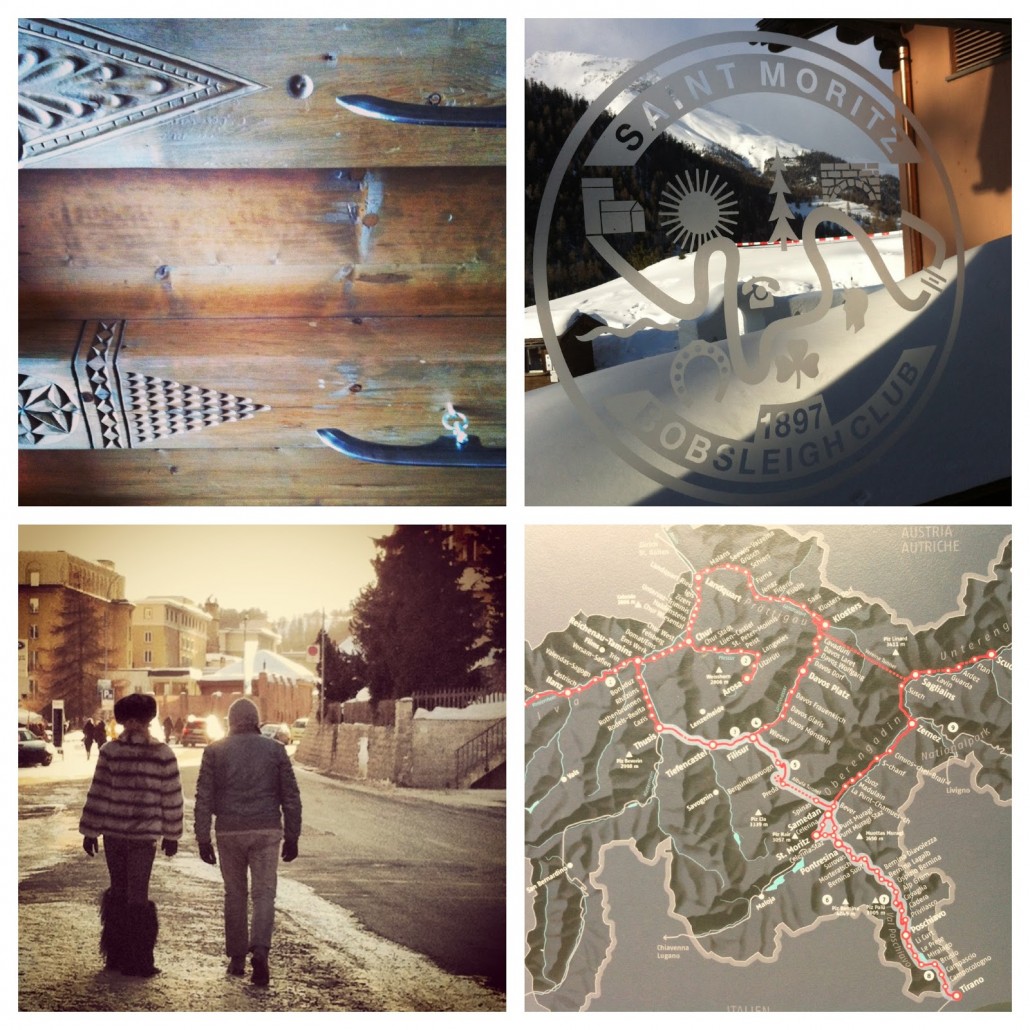 We could tell Monday morning it was time to head home as the skies were clouded over and our snowshoe trek on Muottas Muragl was exhausting. It seemed appropriate that the same trip back through the mountains slowly transitioned us back from winter wonderland with a more alpine villages. It was nice to be home, and to have so enjoyed a weekend that we were already ready to plan our return trip. 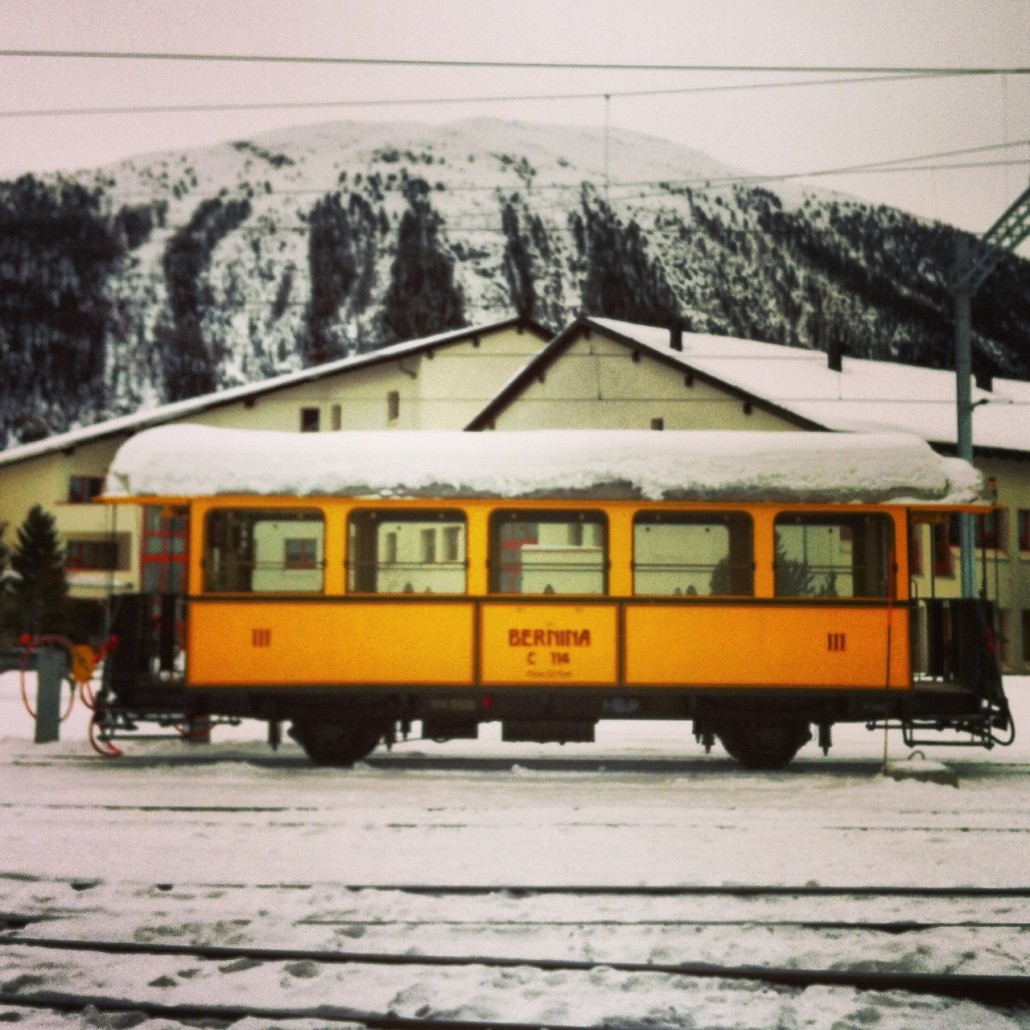 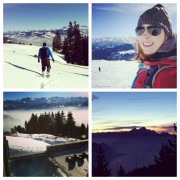 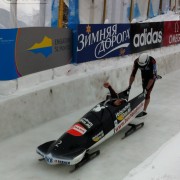 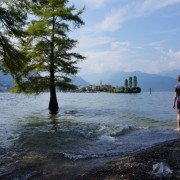 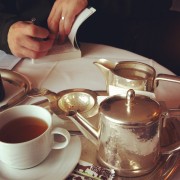