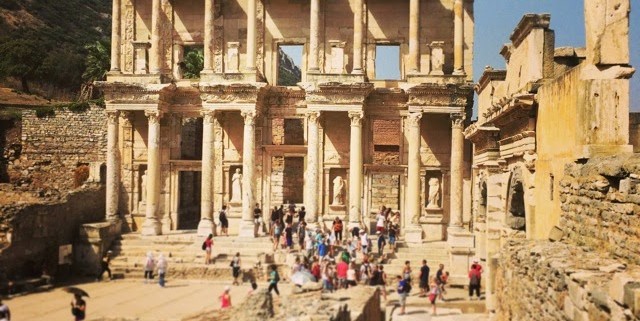 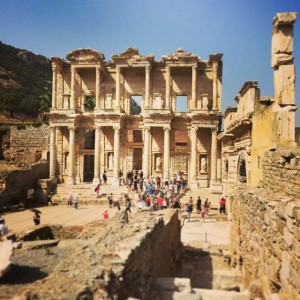 All the days of sun and water allowed us to rest up for our next adventure–exploring ancient Ephesus (Efes). At first I was a little hesitant to leave the sound of the waves behind to drive several hours through rural Turkey to get to the city ruins, but Martin was eager to go and so we set out one morning after breakfast.

The drive itself was interesting. We wound over parched hills, around a large lake, through numerous  ramshackle villages, and most surprisingly, past at least three middle-of-nowhere outlet malls, most with stores I’d never heard of except Starbucks (!) and Adidas. Two hours later we arrived at Ephesus and wandered back in time.

Ephesus was originally a harbor city but as the harbor slowly filled with silt from the river over time the city lost access to the Aegean Sea and the city declined as a commercial center. Now several kilometers inland, the land between the ruins and the sea is all agricultural.

We walked the main street from the old Harbor up through town in the opposite direction of most visitors and this allowed us to get some of the big sights finished before they were overrun by the crowds, and also before the sun became even more unbearably hot. First along the road is a collection of Roman mile markers used along the nearby roads, as well as the ruins of thousands of beautiful granite and marble columns and cornice pieces neatly aligned in rows.

Ephesus is probably most known for the ancient Temple of Artemis, one of the seven wonders of the ancient world. Unfortunately only one column of the Temple remains today so in my view the most awe-inspiring views are of the main amphitheater which originally held an audience of 25,000 for drama and then later, gladiatorial competitions. These days the only drama inside was provided by several Asian couples who were still busily posing for perfect glamour shot by the time we walked through the ruins.

From the amphitheater we walked towards the marketplace and on to the Library of Celsus.
The library’s facade was fully reconstructed in the 1960s and 1970s from all the pieces. Much of the archaeological reconstruction and preservation work around Ephesus has been with the longstanding support of the Austria Archaeological Association. 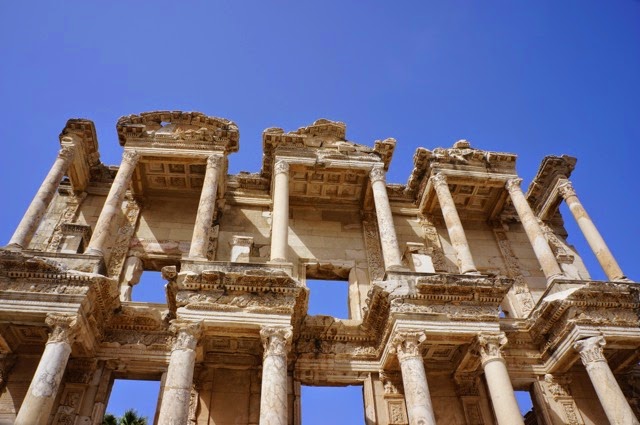 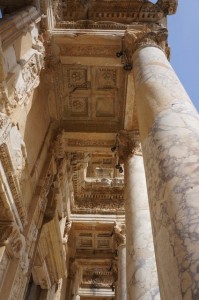 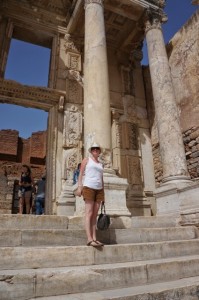 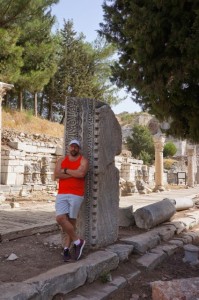 The aquaduct and sewage systems in Ephesus were very advanced and some of the original ceramic pipe can be seen below. This same plumbing provided radiant heat to the walls and floors of the city’s fanciest houses, as well as hot and cold water. 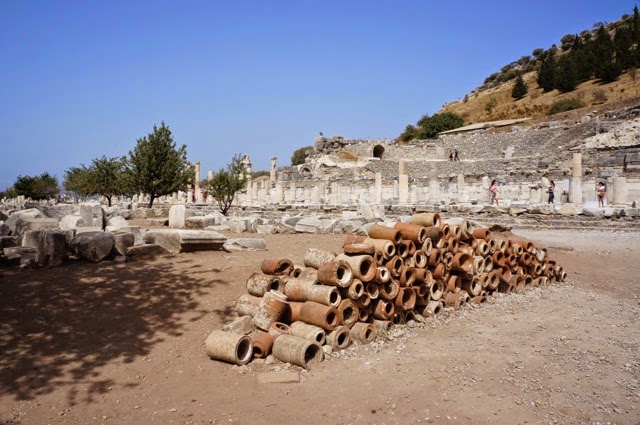 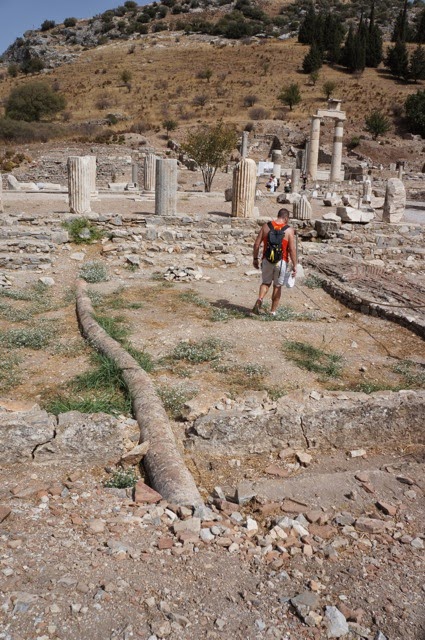 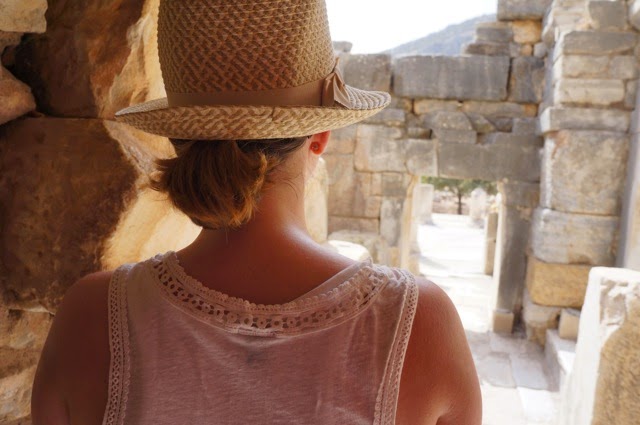 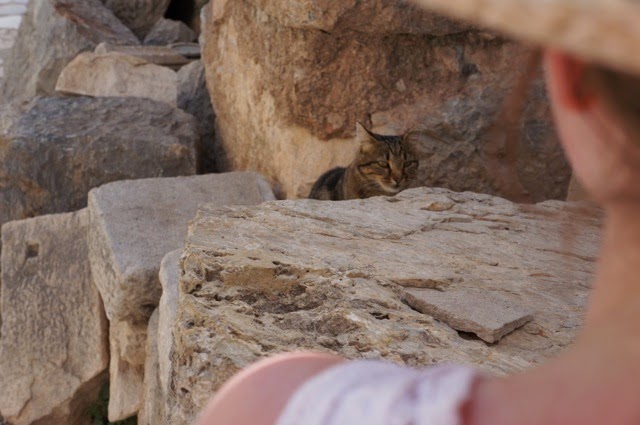 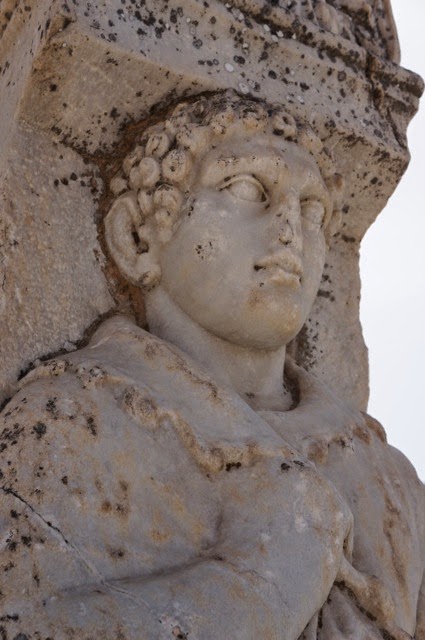 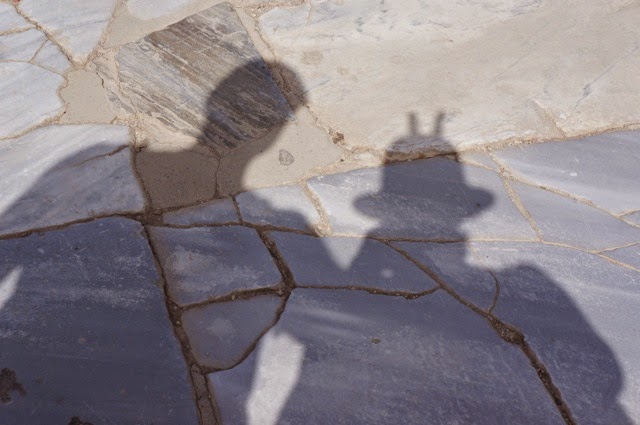 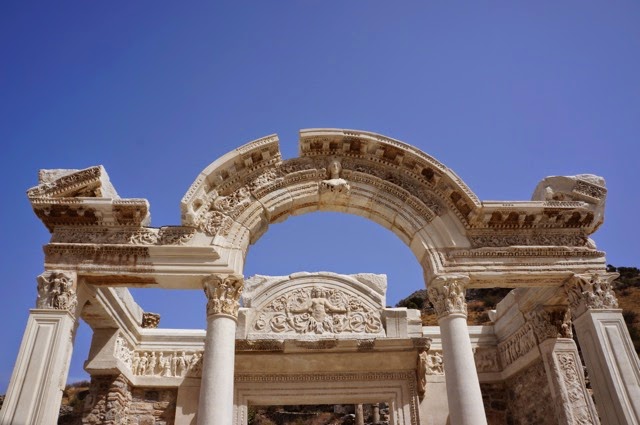 After walking through the rest of town past numerous fountains, the baths, and Hadrian’s Temple (above) we entered the famous terraced houses. Now covered with a protective roof, six houses of wealthy families under extensive restoration. The walls and floors of the houses were covered in elaborate mosaics and frescoes, most of which are now part of a massive puzzle slowly being reassembled.

All in all we saw the best of the city within a couple of scorching hours and then took a scenic drive along the sea back towards our hotel. We were back on the beach in time for a late lunch, a very refreshing swim, and another day of lounging before heading off for more cultural and cosmopolitan adventures in Istanbul. 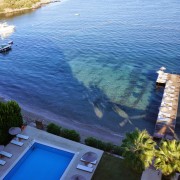 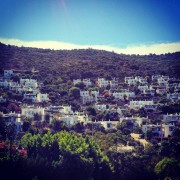 take me back to turkey 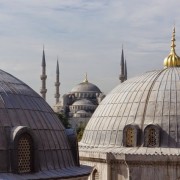 freitag favorites + the woolly wonders of fall
Scroll to top