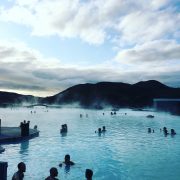 We arrived in Reykjavik early on a Thursday morning, around 6.30 am and headed straight for our rental car. It was a chilly morning but the sky was clear and the sunrise colorful. After picking up our car, and identifying and installing the least gross of the available car seats, we headed straight for the infamous Blue Lagoon geothermal spa, a short drive away, as we had already reserved one of the first swimming slots at 8.00 am. At the time, I figured little else would be open that early that would keep us awake and floating in a geothermal pool would probably feel great after a long flight. And, as it turns out, it was one the best decision of the stopover and I would highly recommend the same schedule for anyone arriving at the airport early in the morning. END_OF_DOCUMENT_TOKEN_TO_BE_REPLACED