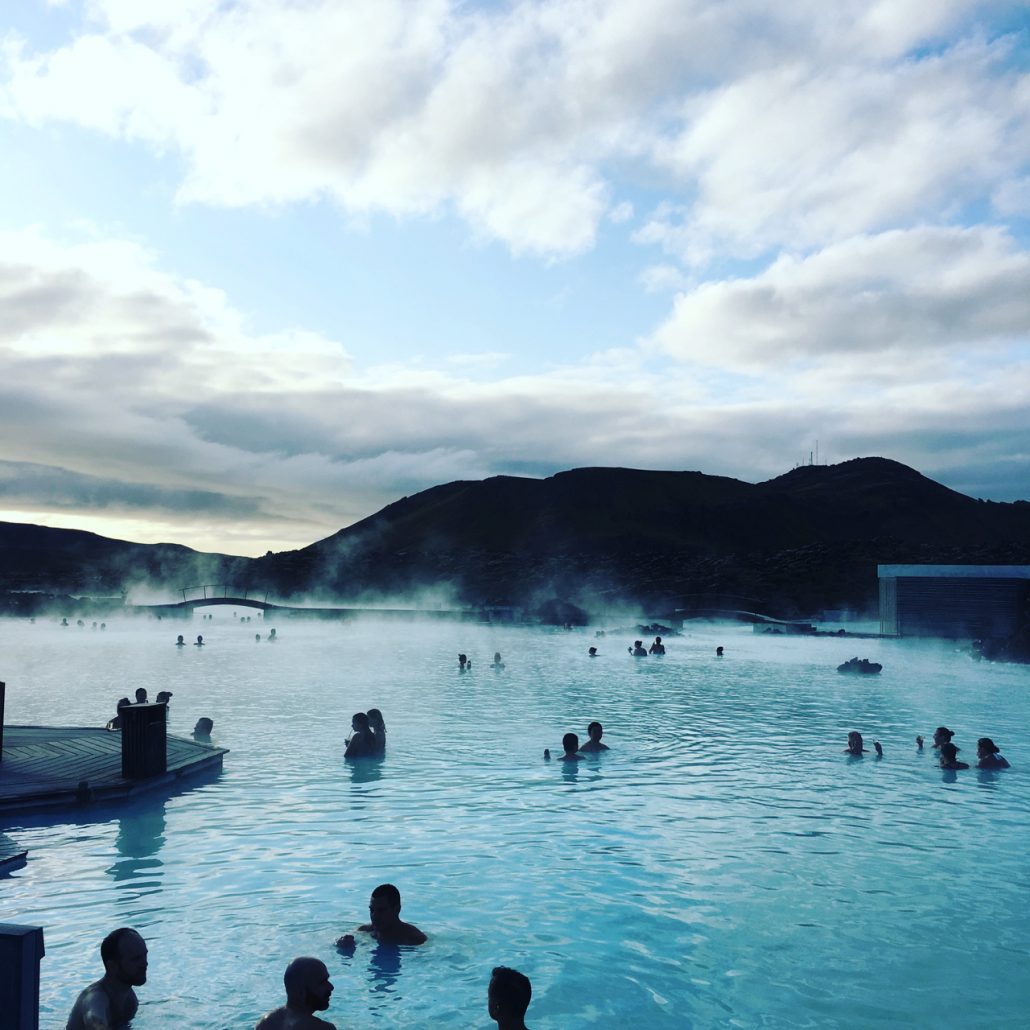 We arrived in Reykjavik early on a Thursday morning, around 6.30 am and headed straight for our rental car. It was a chilly morning but the sky was clear and the sunrise colorful. After picking up our car, and identifying and installing the least gross of the available car seats, we headed straight for the infamous Blue Lagoon geothermal spa, a short drive away, as we had already reserved one of the first swimming slots at 8.00 am. At the time, I figured little else would be open that early that would keep us awake and floating in a geothermal pool would probably feel great after a long flight. And, as it turns out, it was one the best decision of the stopover and I would highly recommend the same schedule for anyone arriving at the airport early in the morning.

The short drive from Keflavik airport to the lagoon takes about 25 min, on wide open roads with views to a landscape that make you feel a bit like you should be on the moon. Even 10 minutes away, you can still see the steam rising from the lagoon, as well as other little puffs of steam floating up across the barren, rocky landscape. Parking was wide open at the time of day, though there were a number of other people in line for the 8.00 am entrance. We chose to leave our luggage in the back of the car, but there is a place you can check your bags which would be more secure.

Note that the price of admission is not cheap, but in our experience it is an Iceland tourist destination that actually was not to be missed. I had selected the basic “Experience Comfort” package (ca. 80 USD) and I think this one is totally fine unless you really want extra spa services or a robe. Unless you are planning on traveling with your own towels, this package is worth it. As it is, it comes with one free drink of choice (including yogurt/skyr smoothies) at the lagoon bar, as well as a towel, and access to both silica mineral and algae face masks in the lagoon.

Upon entering the spa you are directed to locker rooms where you can change, shower, and then generously apply leave-in conditioner before heading to the lagoon. After reading a lot about what the silica in the lagoon can do to longer hair, I put in a lot of conditioner, and it turned out totally fine. However, if you plan to go under water, you may want to consider a swim cap. Once heading for the lagoon there are places to hang your towel/robe outside before getting in. Small children must also wear water wings, which are provided just next to the lagoon in various sizes. (Children are not permitted under the age of 2.)

It took me a bit of time to negotiate changing Reese and myself, but eventually we made our way in to the lagoon. Reese was hesitant at first, but once she realized it was warm and her new birthday rubber ducks would float (as did she) she didn’t want to get out.

Thanks to the early arrival, it was still pretty quiet and peaceful in the water, perfect for waking up, and taking a lot of picturesque early morning shots. It didn’t start to feel more crowded until around 10 am.

As far as taking photos, I definitely recommend bringing a waterproof camera or waterproof iPhone case as we spent a lot of time carefully negotiating the water with our iPhones around the lagoon and on the edge, tempting fate. You could buy waterproof sleeves on site, in a pinch, but they were definitely priced for tourists.

After floating and wading around for awhile, we headed for the bar and several berry yogurt smoothies. We sat on the side and tried to get a least a few sips before the hungry toddler next to us sucked them all down.  A bit later, we also got some hot chocolate inside and took a little water break to let our prune-like fingers and toes dry out before a second trip in, when we applied the masks and tried patiently to let them dry before washing off.

In the end, we probably spent about 2.5 hours in/out of the lagoon before it really got busy, we were soggy, and super hungry. Next time I would probably bring a bit more on the plane or for breakfast, though we probably could have also gotten something at the lagoon restaurant. Instead, we showered off, detangled, and got dressed before heading warm and refreshed back out to the car for the 45 min drive to Reykjavik, lunch, and our next adventure. 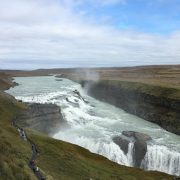